Up it goes, wedged in with dreary texts on machines lopping open men and removing certain organs soiled by cancer. My autobiography. Currently No. 7 and certain to rise higher. Of this, I am certain. And, yes, it is still available in glossy ebook format. Who knew cancer could be so profitable? I'd settle for a number of dry days, but those are the wishes of yesterday. Still, modest literary note is delightful and I'm going to continue saying as much.

Flying to Vancouver, then driving down to Washington, we passed over the Alex Fraser Bridge. A fine bridge with adequate lane space and no gaps in the roadway. All I ask for in a bridge. Despite the rain, and crappy airlines, we enjoyed ourselves and the favorable exchange rates currently available in Canada.

In Washington, we were fortunate to experience a sunny day. I went out for a short run—my first in the state since 2008—and observed the fabled Mt. Rainer.

Better, more photogenic, views arose later but my camera was not available. Great to see the cousins and relax after a hectic time in Vancouver. Before leaving, my weight was down to 245 from a high of 271 in March. But I fear vacation eating has edged the scale back up. Then I'll start again, by heavens.
at September 15, 2019 No comments:

Email ThisBlogThis!Share to TwitterShare to FacebookShare to Pinterest
Labels: Vacation 2019 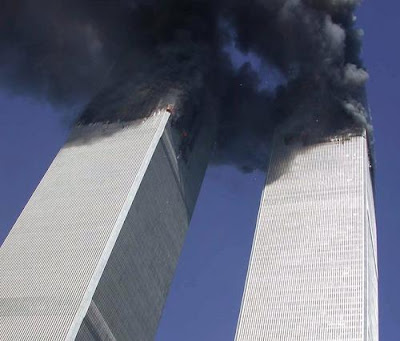 K called from Florida, "Planes crashed into the World Trade Center and one of the towers just fell." Unemployed in Los Angeles and half asleep at 7:30 AM, I shuffled downstairs to the TV, past Joy as she prepared for work. At first, all I saw was a dirty cloud obscuring southern Manhattan. Then a stunned announcer said the second tower had just collapsed. Joy joined me, work forgotten as we learned of the attack. 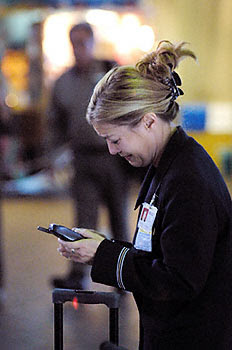 Other friends phoned throughout the day. Paul Rugg speculated about the pilots of the doomed aircraft, certain they weren't Americans forced to crash. TJ, a Vietnam vet, was incensed at the footage of jubilant Palestinians with their candy and AK-47s. He wished he could gift them with a nice buttering of napalm. In a grim mood, I agreed.

Watching TV and power-chewing Nicorette, I mostly felt numb — except when the subject was jumpers. Then I felt horror. Go to work, sip coffee, joke with your pals, then decide whether you'll suffocate, burn alive, or leap a quarter mile to certain death. Questions of etiquette arise: jump solo or hold hands with a co-worker? Perhaps several of you link arms and form a chain, finding courage in numbers. Or do you clutch a table cloth and step into the air, desperately hoping it slows your fall? 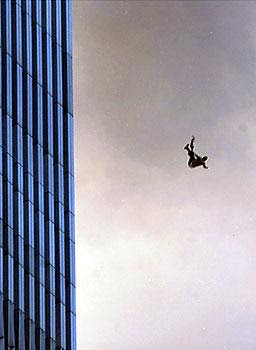 
Air velocity rips away your shoes.


You explode on impact.


Oceans of paper were blasted from the towers, filling the New York sky like the Devil's ticker tape. Invoices and wedding invitations floated down to gray sidewalks.

My friend Cathy, who worked in D.C., reported chaos as the government sent everyone home at once following the Pentagon attack. One jammed intersection turned scary as a man leaped out of an SUV brandishing a pistol and attempting to direct traffic.

Being murdered is not a heroic act, though it can be. Flight 93 passengers fought back and died, saving many more in their sacrifice. North Tower Port Authority employees rescued over 70 people before perishing. 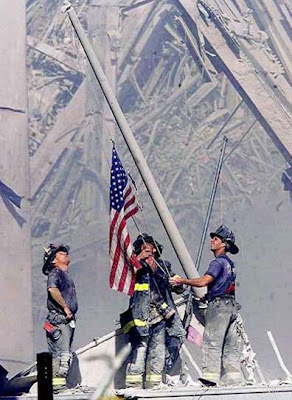 There were many heroes that day.

My sister Mary Pat and I had dinner at a coffee shop. She was passing through town, leaving a job in Mountain View, CA to return to Phoenix. Depressed by the day's events, our meal was not jolly.

Later, Joy tried to give blood, but the hospital was overwhelmed with donations and refused.

Such a beautiful morning with a sky so blue.

Update: Strange to reread this. TJ died in 2009 and K passed away just over a year ago. My wife, Joy, and I are doing well, as is Paul Rugg who now rides the train.

Update: I had cancer surgery last year, but recovered. My wife is doing well and my sister battles her own health woes. I have not heard from my friend Cathy in a few years.  Paul Rugg continues riding the train in addition to being a voice over machine.

Update: Paul Rugg's daughter was not quite two years old on 9/11/01. Now she is a freshmen in college. I have retired from TV animation writing, though, as stated elsewhere, I find retirement to be indistinguishable from unemployment. (Save for a small annuity.) And very soon, I shall ride the train to see my sister. (Explanatory post t/k.)

Update: Ten years have passed since I composed this post, 17 years since the incident. Alas, the greatest hit to our nation continues to be a colossal security apparatus that can't seem to function without monitoring everyone's communications, then lying about it. I'd rather not comment on airport theater. Still, my wife remains gainfully employed and I'm racing to complete a dystopian thriller by Christmas. Amidst the great events, the little things carry us forward.

Update: About to publish a softcover version of my prostate book. Meanwhile the Afghanistan Forever War continues. I refuse to believe that for almost 20 years, there's been no better way of fighting the Taliban than sending billions to Pakistan to provide hiding places for them while they infiltrate Afghan government forces and assassinate our advisors. The Byzantine Empire lasted over a thousand years battling multiple enemies on different fronts, employing a combination of diplomacy military prowess, and strategic alliances. With the entrenched, consequence-proof dimwits we have infesting Washington D.C., we'll probably end up surrendering to the Taliban.

Email ThisBlogThis!Share to TwitterShare to FacebookShare to Pinterest
Labels: 9/11 2019

They Took My Prostate Approaches in Softcover

Two posts in one month. How loquacious I've become! Set aside your Kindle. The softcover version draws nearer.
at September 04, 2019 No comments:


My tale of murderous witchcraft in a Hollywood apartment building has been selected by Soteira Press. "Mark of the Bruja" will appear in an upcoming anthology of stories themed around horror in California. Keep an eye out for publication updates. A lot of water under the old author bridge since I last published a short story. Nonetheless, no better promotion for a writer.

"Prostate" inches toward publication as a softcover. The PDF should be finished by tomorrow and, hopefully, the back cover and spine by Tuesday. Possibly a dummy copy will be in our hands by week's end.

On the running front, my knee has been tender since early July. I've still been going out 3x a week, but taking it easy. Yesterday, I put in 3 miles, but failed to arise early and suffered from the late summer heat. Slow on the running front, but speeding across the literary veldt like a cheetah on the keyboard.
at September 01, 2019 No comments: