What I Learned While Running

Busy with selling the house. We have become guests in our own home, leaving when prospective buyers arrive. We like to set out little treats such as bowls of steaming corn beef hash in every room. Our realtor has asked us to stop doing that.

My assistant coaching continues. Yesterday I ran with different pace groups. You pick up a lot about people on long runs. For example, at least three of my teammates were college athletes: two swimmers and a tennis player. Another teammate works for an elevator company. (Apparantly, you're in more danger from an elevator falling "up" because of counterweight problems then you are of crashing down to the basement.) Another runner owns a Ph.D and moonlights as director of a Civil War brass band.

Sam Plenty roots. Paul Rugg saw this serial in 2004 and was inspired.

For indigenous American surrealism, it’s hard to beat the Saturday
matinee serials of the 1930s, and I’m not sure that “The Phantom
Empire,” a 1935 release from the Poverty Row studio Mascot, can be beat
at all. Very likely the world’s first singing-cowboy science-fiction
adventure, this 12-episode chapterplay, directed by Otto Brower and
Breezy Easton, features Gene Autry in his first starring role — as
“Gene Autry,” the proprietor of Radio Ranch. This curious institution
seems to be at once a working cattle concern and a full-scale
broadcasting business from which Gene and his pals (including his
longtime sidekick Smiley Burnett) send out a daily program of
country-western songs.

Life is sweet at Radio Ranch until a band of “renegade scientists”
arrives, looking for the massive radium deposits of the secret
underground nation Murania, the gateway to which happens to be located
in a canyon behind Gene’s ranch. Before too long, Gene and his two l’il
pardners (the child actors Frankie Darro and Betsy King Ross) find
themselves caught between the rampaging savants and the legions of
Wagnerian Thunder Riders (accompanied by appropriate sound effects) and
lumbering mechanical men (whimsical robots built for a production
number in MGM’s “Dancing Lady” but cut from the final film) sent forth
by Murania’s “She”-like Queen Tika (Dorothy Christy) to prevent her
land of peace and plenty from being invaded by rapacious “surface men.”
It’s a lot for Gene to handle, particularly since he has to get back to
Radio Ranch by 2 p.m. every day for his broadcast, which he carries on
as if nothing out of the ordinary had happened.

It is said that Wallace MacDonald, one of the serial’s five credited
writers, came up with the concept while under the influence of nitrous
oxide at his dentist’s office. That seems quite possible, given the
screenplay’s furious imaginings, which include an interesting kind of
television that requires no cameras (but has an inconvenient,
floor-level circular screen) and “radium bombs” posed to destroy the
entire planet.

What gives “Phantom Empire” its enduring charm is the refusal of the
filmmakers to play any of its outrageousness for laughs. As extravagant
as the action becomes, the picture never loses its sense of complete
conviction.

Long a victim of third-rate, public-domain releases on home video,
“Phantom Empire” has been nicely restored by VCI Entertainment for a
new two-disc edition that also finds room for a complete Autry feature
from 1937, Joe Kane’s “Boots and Saddles.” The VCI catalog, which
includes an extensive collection of serials and B westerns, is online
at vcient.com. ($19.99, not rated.)
at March 25, 2008 3 comments:

What happens when a pacifist professor in a crime-ridden town magically acquires the berserker fury of the Vikings? As crooks quickly learn, justice can be swift and messy with big chunks of brain scattered everywhere. Watch for the first installment of "My Ax is Quick," a Jack Odin mystery. Coming soon. Here. And nowhere else.
at March 18, 2008 11 comments:

Paul Rugg and the "Explosion of Doom"

Episode Four is up as Sam Plenty battles Queen Verbosa's invisible hordes.
at March 17, 2008 No comments:

Sometimes They Come Back

On Wednesday, I dispatched a large rat that had been causing mischief. I dumped the carcass in a drainage ditch that runs through the back of my property, knowing from experience that the ecological dining service — coyotes, owls, raccoons, bobcats — would handle matters from there.

On Thursday, I woke up early and took out the trash, leaving the garage door open. Two hours later, carpet cleaners arrived. One of them located me as I worked behind the house. He said there was a big dead rat in my garage. Sure enough, it was the same one I'd killed the day before. Perplexed, I deducted the following:

1. A large bird or animal seized the carcass, but for some reason dropped it by chance in my garage.

2. A human being(s) walked onto my property, into the drainage ditch, picked up a big dead rat, and placed it inside my garage.

3. Using cosmic rays, aliens reanimated the rodent. Seeking revenge, it attacked but expired once more before reaching me.

4. A human being(s) walked onto my property, into the drainage ditch, picked up a big dead rat, and accidentally dropped it inside my garage enroute to taxidermy class.

Then there's this possibility.

Email ThisBlogThis!Share to TwitterShare to FacebookShare to Pinterest
Labels: Misc 2008 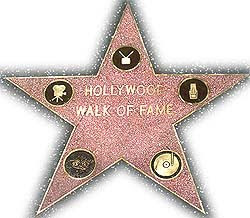 The Sam Plenty Cavalcade of Action! Show Plus Singing appears to be picking up some traction via viral marketing. But I've developed amnesia and can no longer remember why.
at March 13, 2008 4 comments:

Steve, Julie and I worked together for many years at Warner Bros. on fun animated things. In addition, they also provided the score for my solo venture into filmmaking, the 1999 short The Glendale Ogre (one of only several trillion parodies of Blair Witch.) Post-Warners, they scored a public service announcement on land mines that I wrote and produced for USAID — Agency for International Development — and the State Department. (A project two minutes in length and three years in the making that took me to Cambodia twice and Washington, D.C. three times. A saga worthy of it's own blog.)

In any case, if you happen to have any old films or animation laying around the house and need them scored, give the Bernsteins a ring. Let them know if you have a coupon.

If you like singing cowboys, cheesey special effects, evil people who live underground, and large Hawaiian gals who just happen to be on a ranch, then you'll love Sam Plenty. Written, produced and directed by Chilean auter Sanso Pontapuntaquenia, this comedy homage to Gene Autry serials of the 1930s captures all their goofy story points and bad acting . . . plus singing too! Presented by the Jim Hensen Company (makers of fine Muppets), Sam Plenty in Underdoom is now showing webisode three, "Test of Doom." Also check out Sanso's podcast interview.
at March 10, 2008 No comments:

Eleven years. I realize that I've lived in this house longer than I've lived in any one place. Second prize goes to my family's home in Skokie, Illinois. (Ten years until I left at age 19 to join the Marines.) And my friend Dave's guest house in Hollywood takes the bronze medal. (Almost six years.)

These thoughts arose as we looked at condos yesterday. There was one smallish condo in a nice building in a quiet area and that has become our template against which other condos/townhouses were judged. And they were judged harshly. There were nice condos in rotten complexes and rotten complexes with ill-kept condos, plus decently-priced, roomy condos in squalid, gang-diseased neighborhoods.

I really don't like viewing places where the people are home. They remind me of pet store animals, eager to be purchased. When our house hits the market, I'm gonna be parked in a coffee shop with the laptop. The only words I want to hear from a potential buyer are: "We'll take it!" ("We'll take it above the asking price" would be even better.)

Finally slept in my own bed last night. Our bedroom has been covered in plastic all week as the painters stripped wallpaper, sanded, primed, painted and conversed in Korean. We slept on a futon in my office. The painters are still here this week. I have a feeling they like the place. Possibly they'll make us an offer and save everyone a lot of trouble. Certainly they'll know what colors to paint once we're gone.
at March 10, 2008 2 comments:

Email ThisBlogThis!Share to TwitterShare to FacebookShare to Pinterest
Labels: Misc 2008

Summer Team ran eight miles today. During and afterwards, there were many small injuries ranging from sore IT bands to tight calves. In fact, I've never seen so many people icing minor dings this early in a season. Coaches Katie and Kate held an injury clinic afterwards, instructing the disabled on what actions they could take. (Mostly ice and rest.)

My own training suffers from all the work being done around the house. Someone has to be here and I'm struggling to squeeze in runs when I can.

Contrary to my fine wife's opinion, I do not miss television. In fact, since she has cleaned out her old office, we've discovered a functioning TV. Of course, now it's covered in painter's plastic, but my computer plays DVDs should the urge arise. And when the urge arises, I can contemplate the fact that I sold most of them last fall.

One less thing to move.

(Note: This is the 3rd post I've ended with some reference to moving or not moving something. I'm as tired of this as you are. I promise I'll stop now.)
at March 08, 2008 No comments:

I present this little gem to all who just finished the LA Marathon.