So here I am over at the Disney Channel, looking for work. They have monitors in the wating area running Disney programs. Suddenly, a shocking, familiar sight: Pinky and the Brain! It seems Disney's Jetix channel leased a block of the old Warner Bros. animation library. Returning to TV this Sunday will be Batman, Superman, and, on Monday, Pinky and the Brain.

An episode I wrote, "Brainania," airs Friday evening, Oct. 5. (Check your local listings, as they say. ) P&B attempt to take over the world using the power of static cling, generated by a colossal clothes dryer. "Brainania" was part of the WB's short-lived, P&B prime-time show, produced by Peter Hastings and Rusty Mills. Our indefatigable mice were slotted head-to-head with 60 Minutes, a Sunday-night ratings monster in 1995.

And that was that.

But 12 years later, 60 Minutes ails, the WB has perished and Pinky and the Brain live on.

Email ThisBlogThis!Share to TwitterShare to FacebookShare to Pinterest
Labels: Writing

Fat Bat in the Great Northwest 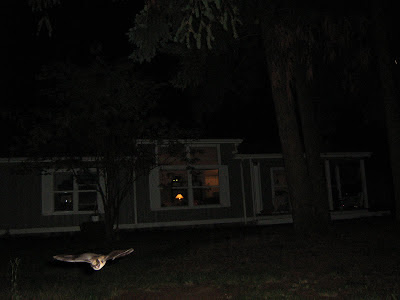 Gliding through the night, we see a plump bat. My sister sent me this photo, so it could be Washington state. Wherever it is, they sure have chubby bats.
at September 24, 2007 No comments:

Lots of it last night. With the Rose Bowl closed to the running public for a football game, Ernesto and I met at a park near JPL. The trails were strewn with run-off rocks and deep puddles; soil loose and damp; temperature lingering around 58. Despite more rain and wet shoes, it was great running weather.

My hip is still sore from Thursday. (I did my long run then — 13.3 miles.) Absolutely wasted; no drive; I've already peaked for Chicago. Injuries and illness have taken their toll. My goal now is to finish, hopefully under five hours. March was too early to begin training for an October event. Unlike last January when Phoenix couldn't come soon enough, I simply want this marathon to be over.

Working on the first five chapters of Dummy Fever. Frequent outlining develops the habit of telling instead of showing the action. I'm having to redevelop certain writing muscles.

Selling fever continues in a lower key. For bigger items such as DVDs, I'm checking out asking prices on eBay and craig's list. It'll give me an idea on how to price things.

Lots of change everywhere, especially under the sofa cushions.
at September 22, 2007 2 comments:

Email ThisBlogThis!Share to TwitterShare to FacebookShare to Pinterest
Labels: Running/Writing 2007

Away, away, Casino, away Apocalypse Now, away to the web resale house! This selling of things is contagious. I've barely scratched the surface on markets for my books, CDs, and VHS tapes. Plus there's costly electronic equipment to unload. Away, away with it all!
at September 17, 2007 1 comment:

On a beautiful day for running, I set out to log 21.6 miles. Alas, I dropped out at 15. I've been fighting a cold all week and halfway up to the Elmer Smith Bridge felt woozy, ready to pass out. (Of course, having my nostrils clogged didn't help.) This would've been my last big mileage before the marathon. Maybe if I rest up and get over this bug, I'll squeeze in one more long run.

Talked to my agent re. Dummy Fever. She likes the outline and wants me to write up a few chapters. That shouldn't be too hard since the story's been marinating in my fine Irish head since May.
at September 15, 2007 No comments:

Email ThisBlogThis!Share to TwitterShare to FacebookShare to Pinterest
Labels: Running 2007

Yes, I've sold a book! In fact, I've sold four books: two on film lighting, one on fillmmaking, and one on defensive football. I also set up a consignment sale for a pair of Alesis MI Active Biamplified reference monitors — a fancy term for speakers used in sound editing. They're a leftover from the days when I had tons of money and thought I'd make my own digital films for a living.

Ah, but the real gold lies in cyberspace — at least until I run out of possessions to sell.
at September 13, 2007 No comments:

Runner parking scuttled at the Rose Bowl this AM in order to make room for tailgaters. And they were there, too, in their RVs at 7:00 AM for a 3:30 PM game. (UCLA vs. BYU.)

Ernesto hurt his calf muscle Thursday and rested. So I ran 16.2 miles. Wearing my Disneyland Half Marathon tee-shirt proved a real conversation starter. It seemed half the runners I met, including non-TNT chums, had been at the race Monday and had a story to tell about the stinking heat. I mentioned seeing runners sitting down on every available curb space because it was too hot to warm up. They looked like forlorn passengers waiting for a train in Bangkok.

Took an ice bath after today's run —fifteen minutes in a cold tub with several pounds of ice cubes rattling around. Climbing out, my legs felt like frozen drumsticks. But, ah, the blood does return, speeding up the healing.

Finally got my lap top back this week. The techs weren't 100% sure what was wrong. I told them to swap out the hard drive and transfer all the data. That worked just dandy and I can now survey my dwindling fiances with the flick of a button.
at September 08, 2007 No comments:

At least that's what it said on my finisher's medal. And what a medal! But I'm getting ahead. The Disneyland Half Marathon was the second hottest race I've ever run. (2005 Honolulu Marathon was first, but not by much.) It was muggy at 4:30 AM and only got stickier as dawn approached.

A quick digression: I believe the afterlife may well be modeled after Disneyland. They certainly know how to move large numbers of people quickly and efficiently.

Back at the race, many runners entered the spirt of the event and wore mouse ears or Minnie Mouse outfits. A lone Japanese guy wore a hat with faux flowers growing out of the crown. During the race, many runners took the opportunity to stop and have photos taken with Alice in Wonderland, the Mad Hatter, and some giant thing from Monsters. (The one that was voiced by John Goodman.)

In any case, the temperature was high enough that the park issued a red flag warning. Interesting choice on Labor Day. Apparantly, communists would shoot runners who finished ahead of anyone in a lower economic class.

Red would be followed by the most extreme temperature warning — a black flag. Not only would it be blazing hot, but anarchists would hurl bombs into the crowd as well as assassinate selected elite runners. Once the race was destabilized, they could introduce autonomous trade unions and a runners' collective, using strikes to compel the race director to step down and allow the development of spontaneous running events without formal organization.

But that would also mean no big, fat finisher medals shaped like the Magic Kingdom.

Email ThisBlogThis!Share to TwitterShare to FacebookShare to Pinterest
Labels: Running 2007

Disney Half Marathon, and Risky Ventures

A day off today: from a long morning run, that is. And like most off days, filled with activity. I drove down to Anaheim early this morning and picked up my race number for Monday's Disneyland half-marathon. Then I dropped off my powerbook again to have a new hard drive installed. Gassed the car and now am preparing to write all day on Dummy Fever while awaiting word on where to meet wife and in-laws for dinner.

Ernesto is in New York for a friend's wedding. Next Saturday he'll run 12 and I'll do a mere 16.

Already a hundred degrees and it's not even noon. I'm fortunate not to be running today.

Another fortunate man was Risky Ventures. You can read about his luck at Products of a Diseased Mind. Then scroll down to absorb the cautionary tale of "Roscoe: The Sensible Sniper."
at September 01, 2007 No comments: