Paul Rugg and I are Hired at Warner Bros. v.2 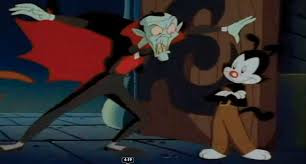 And I Have the Memories to Prove It

Today, December 16, marked 27 years since Paul Rugg and I were offered jobs at Warner Brothers TV Animation. We were over at Paul's house watching Zontar: Thing From Venus, drinking coffee, eating chocolate donuts, and smoking. We'd just turned in scripts for some new show called Animaniacs. (Mine was "Draculee, Draculaa.") Paul's wife was off earning money as a social worker, while my future wife was still employed at the magazine I'd quit two months earlier. Rugg and I were performing improv and sketch comedy at the Acme Comedy Theatre. (Along with cast member Adam Carolla.) Money was very tight. The payment for one script would really help out my Christmas.

Then Kathy Page, Tom Ruegger's assistant, called to offer us staff jobs and the trajectory of our lives veered sharply into an unexplored cosmos.

We were amazed, stunned, numb. Walking outside, we smoked more and talked it over. Should we take the jobs or would they pollute our comedy pureness by turning it commercial? We would accept the work immediately.

Now it all seems opaque. If it weren't for the Web and talking to Paul Rugg yesterday, I'd swear the whole experience never happened. But I'm glad it did. (Paul, too.)  So thanks to Tom and Sherri Stoner. (And her husband, M.D. Sweeney, our Acme director, who recommended us.) 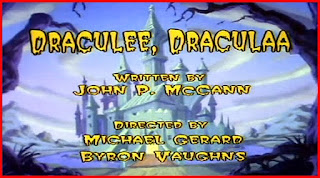 Note: After thirteen years of blogging, I'm running out of life events to chronicle.