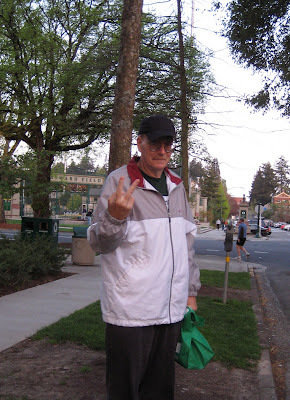 Looks like I finally caught a break on the climate. Eugene offered perfect marathon weather. Temperatures stayed down all morning, thanks to a chill breeze that felt rather refreshing several miles into the race.

Peter appreciated the tribute to Rosina. He closed an email with: "The only marathon I've participated in recently was watching all three Indiana Jones movies in a row with my son. Which, by the way, started out Okay, but took a lot longer than 4 hours and was ultimately just as painful as running."

A few words about chips. Pretty much all marathons use running chips. These plastic objects attach to your shoe laces with skinny plastic ties and contain various codes. According to an article by Douglas Fruehling: "When runners run over mats placed at the starting line, an electrical current in the mats creates magnetic fields that charge the chips. The mats have receiving antennas that send the codes on the chips to a nearby controller box and computer, recording data for the runners."

In monster marathons such as Chicago with 45,000 participants, a runner might need a half-hour just to cross the start line. Pre-chip (1996), that meant 30 minutes of dead time tacked onto your finish. Nowadays, runners begin their marathon the instant their chip passes over the starting mat. This is known as "chip time" or "net time" and measures how long runners run regardless of the official clock.

In a small race like Eugene, it took me about 20 seconds to cross the start line. As I ran the last kilometer, I mention seeing the official clock inching into four-hour territory. Thus I knew I had a few more seconds to reach my goal.

That said, there is finish line video of me at RunnerSpace.com If you click on the 4:00 - 4:05 Hour Finishers, check the extreme far right of screen between :38 and :50. After checking my watch, I raise both arms in celebration. There's more, but it's blocked by two very oval half-marathoners who stroll through frame.

On the subject of weight, Horizon Air was apparently the first airline designed for anorexics. The seats were very narrow. Airline staff cautioned passengers to please keep their shoulders out of the aisle so they could maneuver the drink cart.

Eugene is such a green town our hotel room had a special recycling wastebasket. I'm all for recycling and being good stewards of the Earth, but if a place gets too green it makes me nervous and I start thinking Wicker Man. Eugene borders on that.
at May 07, 2008

That video is pretty awesome... clear enough for you to recognize the runner. The one for Boston was horrible. You weren't kidding about the two oval walkers. =)

Looks like they lock the camera down and let it roll.

When I visited Eugene, it didn't seem all that strange to me...

I happen to prefer that there be a recycling bin in the hotel room, so I don't have to hide the recyclables from the maid, lest they end up in the regular trash.

Joy McCann said...
This comment has been removed by a blog administrator.
7:16 PM